SuddenlySusan over at Freezerburned challenged me to a food budget throw down for the month of September.

We both decided to try to reduce our food budgets by at least 10 percent and to post pictures.

Mr. Smith generally handles the grocery shopping for us and he’s a real sport about it. As I’ve become more environmentally aware, he has started taking our reusable grocery bags with him and uses our glass jars for the bulk bins. 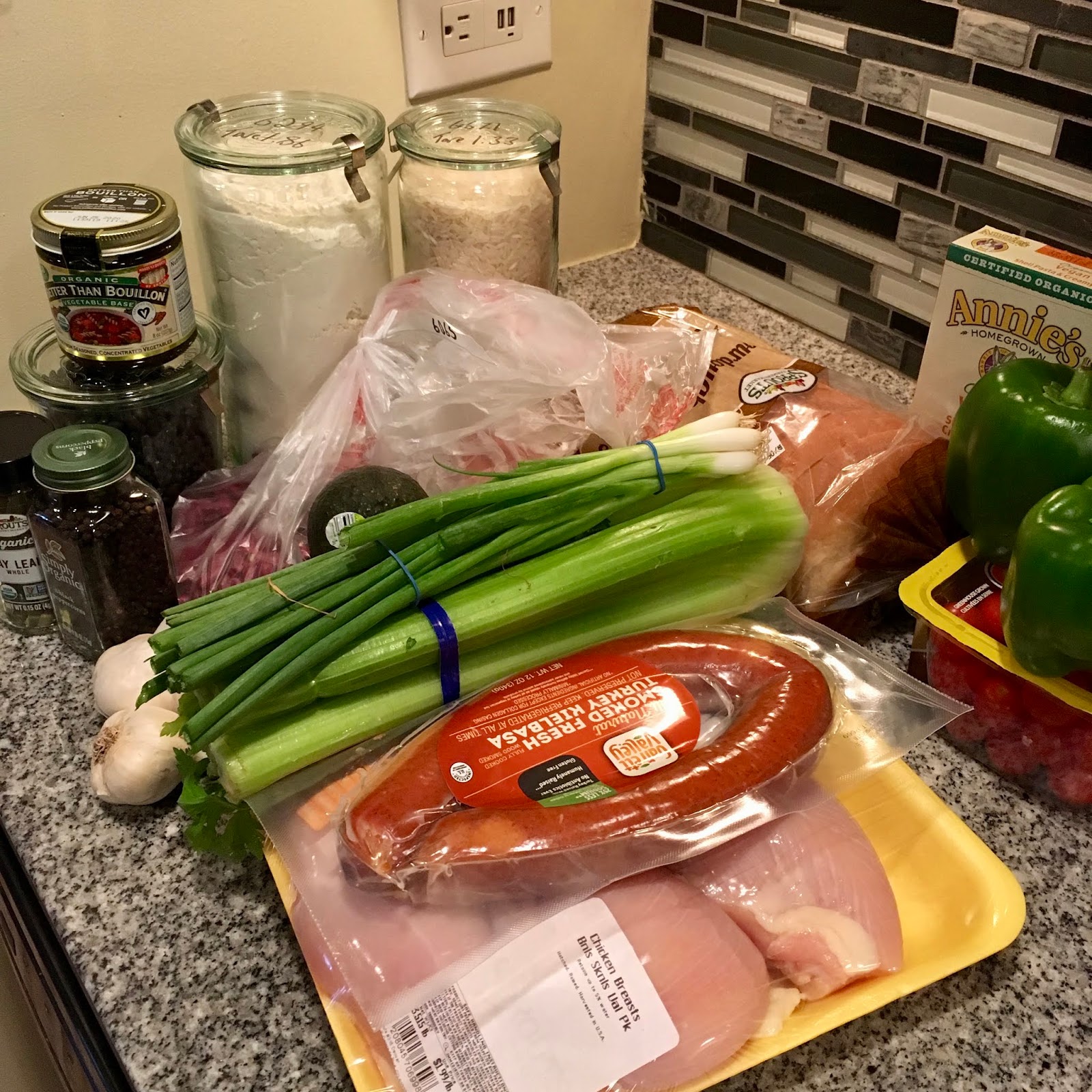 This is what $56 of groceries looks like for us. Part of our plan for the challenge was to do a pantry and freezer clean out. As a result, we didn’t need to pick up all that much for the week.
Chicken breasts were on sale for $1.99 a pound this week. We’ll only use one of the chicken breasts for dinner and the other two will end up in the freezer. Grocery stores don’t make it easy to shop for two, but we’ll have chicken for two more meals now.
There are a few long-term buys for this week that include a container of whole black pepper, vegetable bouillon, and bay leaves. If you don’t freshly grind your pepper, you totally should. It’s magical!
We bought a couple of bulk items to have handy including the flour and rice. We actually didn’t need to buy the rice since we had a jar hiding in the back of the cabinet. It’s not a big deal though since it’s shelf stable and we’ll eat it.
We also had one splurge purchase of vegan macaroni and cheese. I’m a sucker for mac-n-cheese and will try new varieties as I find them.

This is what an $85 grocery trip looks like for us. We’re still in the midst of our pantry and freezer clean-out, so we didn’t need much for the week.
The largest expense this week was two pounds of lunch meat for lunches during the week. We’re suckers for good lunch meat every now and again. It’s also one the largest pieces of plastic (with the exception of yogurt and we reuse those containers for compost) that entered our home. Mr. Smith is going to see if the deli counter will put the lunch meat in one of our glass containers next time.
In addition to the sandwiches and chicken from last week, we’re also having two lentil chili for dinner this week. Mr. Smith is making another batch of granola to go with his breakfasts.
I was super proud of Mr. Smith’s choice of baking cocoa. Our chili recipe called for one teaspoon of it and as you can see, baking cocoa only comes in one size. Normally, we would get Hershey’s brand cocoa since it lasts forever and tastes good, but, with the budget challenge, he decided we could try something new. I’ll have to report back during hot chocolate season.
Not pictured are three limes, an orange, chips, pita bread, and non-diary butter cups that we got on the way to a game night at a friend’s house. Not to worry though, they’ll be included in the final tallying.

Towards the middle of the month, I sort of fell off the wagon and wasn’t doing as great of a job with keeping up on thinking through what we purchased.

We tend to eat a lot of fresh fruits and vegetables. It’s neat seeing this in the pictures because it makes me feel like we might be doing something right.

No, we don’t normally eat that many apples. I had “cheap apples” on the grocery list for a while so that I could stock up on apple pie filling in the freezer. We now have enough filling to make eight mini apple pies and one family size pie.

The third picture has a month’s worth of coffee in it.

I think we might be past our sandwich phase for a while. It’s gotten colder here recently and I’m feeling the urge to eat more soups.

Throughout the month, I didn’t take pictures of our meals our or of the two grocery trips that we took while in Michigan.

For the month of September, we ended up a sad 1 percent under budget. We’ll actually be reimbursed for some of our food spending in Michigan since that was a work trip, but overall this is pretty sad for us. On the upside though, we stayed on budget.
We’re trying again for the month of October. The only big event we have is a visit from my mom at the end of the month. I’ll need to work on fitting my plans into our budget a bit better.
How did you do for the month?

This site uses Akismet to reduce spam. Learn how your comment data is processed.